Standing Up For Agriculture 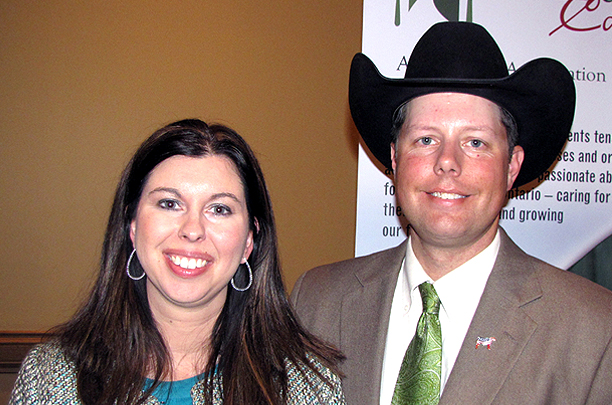 Never again will beef farmers Troy and Stacy Hadrick allow someone else to tell their story about farming.

Since March of 2002, the cow-calf producers from South Dakota have been on a mission to urge farmers to combat negativity towards agriculture and to be their own spokespeople.

The Hadricks brought their message to Canada for the first time during their keynote presentation to the first annual meeting of Farm and Food Care Ontario in Waterloo in April 2012.

Their journey toward becoming agricultural advocates began ten years ago when an unflattering article called, Power Steer, sent shockwaves through the beef industry.
Written by Michael Pollen, it tracked the life of a steer from birth to dinner plate. The steer was born on the Hadrick family ranch.

Troy explained that they worked with the author for several months, believing the article would highlight the positive job they were doing on their ranch.

The story, however, was highly critical of feedlots and grain-fed beef.  The experience was a turning point for the couple.

“You’ve got this choice…you can either let this happen or share the real story of agriculture,” Troy said.

Choosing to speak out, Troy said farmers have to be ready to tell their own story because consumers are interested in agriculture and they want to receive the information from the experts.

However, he said questionable sources such as anti-meat activists are leading the discussion – and they don’t share the whole story.

The Hadricks have developed a simple strategy called the “Three Ts” – Talk, Teach and Touch – to help farmers connect with people and reverse the negative stories.

The couple said that farmers should see themselves as influential people because they’re active in their small communities as members of church boards, various committees and volunteer firefighters.

“We’ve got to start using this influence; we have to talk to consumers and let them learn about what we do in agriculture,” said Troy.

Stacy added that simple conversations are a good starting point. “Because when you start up a conversation with someone, educate them about what you do in agriculture… and you’re honest and passionate,” she said. “That’s all it takes for you to make that connection.”

The couple has also learned that social media tools can be powerful for educating people about agriculture. While working at his computer, Troy noticed an Australian wine company was donating $100,000 to the Humane Society of the United States (HSUS), an organization that has been at odds with livestock groups over animal welfare issues.
To Troy’s thinking, it was wrong for a company that relies on farmers to grow grapes to turn around and make a large donation to an organization “that is trying to put other farmers and ranchers out of business.”

Realizing that he had a bottle of the company’s wine in his refrigerator, Troy grabbed the bottle and a video camera. With his cattle in the background, he recorded a 55-second video in which he poured the contents of the bottle onto the frozen ground while explaining his opposition.

The video, which was posted on You Tube, attracted widespread attention and support from people who added their comments. After the negative attention, the company reversed its decision to support the organization.

While one donation had been made, what Troy didn’t know was that it was part of a three-year plan to donate a total of $300,000. Through his actions, the next installments were stopped. And the only real cost was one bottle of wine.

“None of us  who were involved in this telling of our story, which included farmers, ranchers, hunters and pet owners, left home to do anything about it, but we changed the future course of donations from a major multi-national company because we were willing to stand up and tell our story about how this was affecting us,” he said.

For the third T, touch, the Hadricks recommended giving people your business card and being available to answer any other questions they may have about agriculture.

In a memorable line from the presentation, Troy said people shouldn’t ask Google (the Internet search engine) about where food comes from.